Bears In The Pears Arizona #71

Arizona is largely a sleeper when it comes to thinking about where big black bears are found. But check the books! A really disproportionate number of giant bears come from this state. The reason is that Arizona’s bears are known for their “pseudo-hibernation” during which the bears may actually leave their dens in mid-winter to feed for a few days and then rest some more. This extra feed, plus their short hibernation period, help produce monster bears with huge skulls. 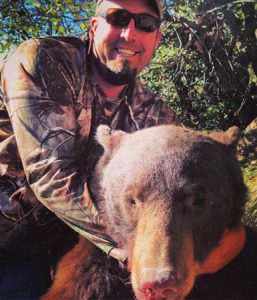 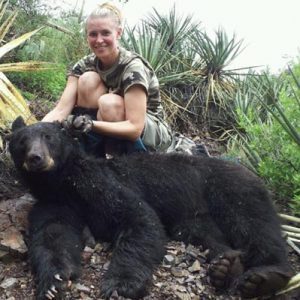 These particular hunts are conducted like no other bear hunts in the world in that the bears are hunted in the cactus while they eat the delicious fruit of the prickly pear cactus. Hunting typically involves lots of glassing with big optics in remote country. These are 4- or 5-day hunts along the Mogollon Rim of central Arizona and several of southeastern Arizona’s mountain ranges for bears with very large skulls. In the past four seasons they have taken 17 bears with 7 in excess of the magic 20”, and they have placed bears very high in the record books in the past, including a genuine 8 footer with a 22” skull some years back.

Arizona allows a late summer/early fall hunt for bears. In recent years, due to the drought conditions over much of the West, the bears’ normal feed of acorns and berries has been failing almost totally. This means hungry bears are forced to look to different food sources in the summer months and they find it on the prickly pear flats, where they are highly visible and where their movements are easily seen by sitting and glassing from nearby hills. The sweet fruit of these pears ripens in late summer and this fruit has led to the down fall of many a big bear. When conditions are right, this outfitter’s hunters can look over many bears, including some color phase, all of which have very nice coats. In fact, as many as 22 bears have been seen on a single pear flat! In terms of hide condition in late August and early September, they have been excellent. We can only surmise that the early release from hibernation, plus the high nutrition forage, is responsible for this.

They hunt these bears the way most experts hunt Coues deer. They get up on a vantage point then sweep the area repeatedly with large optics, spotting large bears. Once spotted, they are then stalked. But these bears keep moving, so it helps to be able to run a half mile or more. Shots can be close or out to 350 yards, so bring a suitable rifle. If you want to hunt with muzzleloader or bow that is fine, and calling can sometimes put the bear right in your lap. If not, borrow a rifle from the guide (who will bring it along for your use at your request). They will also use predator calls, and believe us, until you see a monster black bear running directly at you in response to a call, you just don’t know what excitement is! 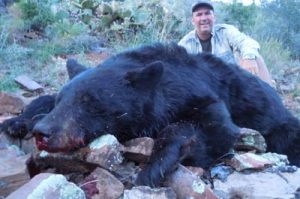 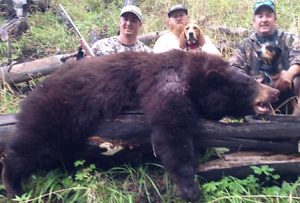 The outfitter may also use his three excellent packs of mountain lion hounds on these bears. It’s very much like lion hunting – driving the roads in the early morning hours looking for a track where a large bear crossed the road during the night. Then the hounds are released, and the chase is on.
Success has been typically very good on these hunts, with close to 100% opportunity, and 6 hunters harvested 5 bears in 2017.

One of the nicest things about this hunt is that the time of year means that school teachers, school-age children, college kids and the like can all squeeze in this hunt at the end of their summer. Hunters stay in deluxe dome-type tent camps, and the weather is usually warm to hot, contributing to an overall fun hunt.
And to top it all off, the permits and license for the bears are over the counter – NO DRAW REQUIRED! 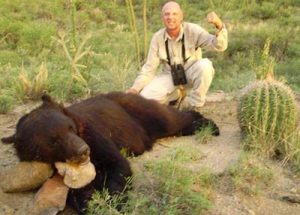