As most of our regular clients know, we are constantly and continually looking for new opportunities all over the world. Also, because we have nearly 20,000 serious hunting clients and work with nearly 300 outfitters world-wide – we get contacted by lots of folks to represent them. Years ago we represented an alliance of various African landowners in South Africa, but they eventually broke up. This operation was part of that alliance.  So naturally this operation contacted us to represent them. This operation then recently merged with and bought out a very large and very well known Safari company and together they can offer just about every specie known to exist in huntable numbers in South Africa! And they also do it well, having put untold numbers of game into the SCI record books. 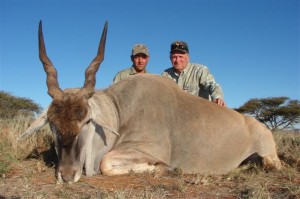 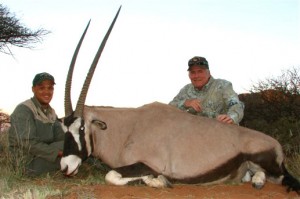 They have FOUR main camps, and also a variety of concessions to hunt. All their property is in the North Cape. Two are close to Kimberley. One of them is 36,000 acres and features luxurious rooms and baths and a lapa where the evening campfires take place. The ground here has rolling rocky outcrops and hills, savanna, huge old acacia trees and more.

Their Second Lodge is also in the North Cape and is located roughly 100 miles east of the south east corner of Namibia. It has 25,000 acres and is a mix of Kalahari sand dunes and Karoo region shrubs.  It has 8 large bedrooms with ensuite baths, satellite TV and internet.

Their third Lodge is in the middle of the Green Kalahari and is located to the north of Pretoria. It has a wide range of veld with a lot of diversity. It has many Gemsbuck and Waterbuck and more. It consists of 22,000 acres. The fourth lodge is also 22,000 acres near Kimberley, and like the other three it has excellent accommodations with en-suite baths and even air conditioning. It too has a large variety of plains game. These four areas provide well over 100,000 acres of prime hunting, and offer 40 species of game including: Cape buffalo, eland, Leopard, Roan, Sable, Kudu, Waterbuck, Gemsbuck, Nyala, Red Lechwe, Blue, red and black wildebeest, White rhino, warthog, blesbuck in various colors, Mountain reedbuck, impala including black phase and many more including several species of Zebra. 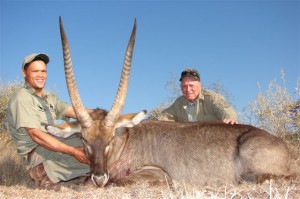 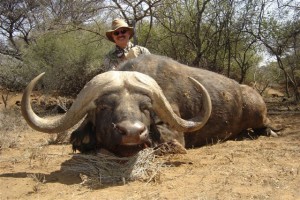 The weather in the Northern Cape and North West regions are typical of any semi-desert area with fluctuating temperatures and varying topographies. Although the annual rainfall is low (approx. 50 – 400 mm) the grass is very sweet and palatable, with scattered Camel Thorn Trees and Acacia Thorn Bush whose pods serve as a great winter fodder for the game. Their areas boast a diverse type of terrain, with hilly  and rocky outcrops that are peppered with Acacia thorn trees and a savannah type woodland that stretches out into the vast open plains, offering our clients the very best of hunting. Tell us what you want and we will custom design and price it out for you!!

A typical safari starts with your arrival in camp.  You will be shown to your room to settle in, unpack and become familiar with the camp.  Time permitting, you will check your rifle at their shooting range to prepare you for the start of your hunt early the next day. As to choice of rifle, for plains game anything in the 30-06 (minimum in our opinion); 7 mag; 300 mag and 338 mag, are fine, with the larger calibers for eland etc. Under South African Law a minimum caliber of .375 is to be used to hunt any of the Big 5 (Lion, Leopard, Buffalo, Rhino and Elephant). That is a versatile caliber and can be used on all plains game species as well, although hunters doing only plains game may well prefer smaller calibers for comfort. In the .375 for dangerous game we suggest using 300 Grain solids and 270 grain soft nose. As a recommendation for all plains game species, calibers such as .300 Win Mag, 338, 7 Mag, 30-06 and the like, are best suited for African antelope. Our choice of bullet brands is either Barnes X, Woodleigh, Nosler, or Hornady softs and also the Swift A frame is excellent. Choose a good quality variable scope to use on your rifle, as a suggestion 3×9 power is sufficient in Leupold, Nikon, Zeiss or  Swarovski make.  For dangerous game a 1.5 to 5 power is best. We do suggest that you bring the rifle that you shoot best.  Good shot placement with a quality bullet is more important than an over powered firearm. REMEMBER THIS- most African game carry their vital forward of what you are used  to. A behind the shoulder shot may miss vitals!! Buy a book and learn the vital areas- it can save you thousands of dollars in trophy fees that are lost.

Camps are very comfortable, permanent thatched roofed lodges with all the modern amenities to ensure your comfort and safety. The staffs at each camp are very well trained and cater to your needs. A  well stocked refreshment counter supplies Beer, Wine, Liquor, Cold Drinks, Mineral Waters and stacks of ice.  Camps have hot and cold running water, flush toilets, ceiling fans and air conditioners. Laundry is done on a daily basis and rooms are cleaned every day by friendly staff.

TRANSPORT:  All our clients fly into Johannesburg, then on to Kimberley. It is really worth the little bit of extra money to fly to Kimberley, as it is a tedious drive from Jo’burg after that long flight from the States! An average plane ticket from Jo’burg to Kimberley will cost +- $250 round trip p.p. We can arrange a drive THOUGH — if you really want it.

Day of Arrival  and day of Departure (These are 2 non-hunting days): $300/day per hunter. 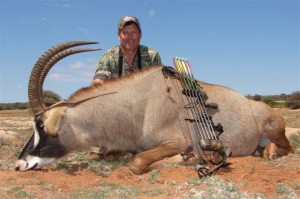 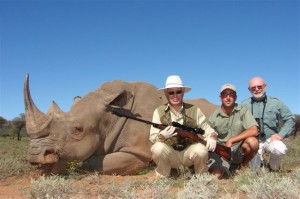 CALL US FOR DAILY RATES

All luggage, domestic and international, is now being screened in South African airports. Screeners are finding ammunition in checked bags that is incorrectly packed and are forcing passengers to remove it from their bags, which is causing all kinds of havoc.

All ammunition must now be packed and transported in a lockable ammo box placed within your checked luggage. A manufacturer’s carton is no longer sufficient. Remember that there is also a limit of five kilograms of ammo per passenger. That includes the weight of your ammo box. And don’t forget to declare your ammo at check-in. They may insist on removing the ammo from your luggage, so make sure its available easily. They then send it as a separate package with your luggage. I do not like it, but in 2013 that is what they did to me.

Be certain that ammunition is packed in lockable cases, which can be handed in as loose items at the firearm counters to avoid possible delays during checked baggage screening.