This fine outfitter has been in business for over 30 years, operating mainly in Africa but also in France and Switzerland, so we know our clients will be in good hands. In Cameroon, they offer two main types of hunts: forest and savannah.
FOREST HUNTS 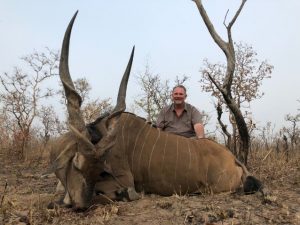 Forest hunting is exciting, and the local trackers and their dogs are excellent hunters. Hunting is mainly on foot, and also from “machans” or blinds. The main species available are bongo (near 100% success), sitatunga, several species of duikers and dwarf buffalo (very high success on all). Elephant (not presently importable into U.S.) and giant forest hog are also found, although they are more difficult to hunt. The general hunting season beings in early April and goes to the end of July. The season for dwarf buffalo is mid-March to end of July, with the best time being mid-March to mid-May. The season for bongo and sitatunga is May to end of July. All hunts are 1×1 guiding. Antelope hunts run 13 days, while buffalo hunts are 10 days. 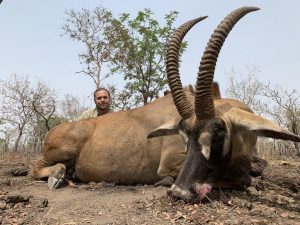 Two different areas are hunted from separate camps, and both areas consist of a series of plains and hills covered by a bushy savannah interspersed with three different rivers. Game populations tend to be dense, so you are likely to see a large number of animals each day. The main species available are the majestic Lord Derby eland, West African savannah buffalo, roan (success near 100% on all 3 species) and korrigum (Cameroon is one of the only places you can collect this rare species, and with the largest population in all of Africa, success is near 100% on this species as well), and lion, hippo, central kob, Sing Sing waterbuck, Bohor reedbuck, harnessed bushbuck, red river hog, western hartebeest, warthog, oribi, western bush duiker, red flanked duiker, baboon, python and civet cat are also available. The hunting season runs from January to early May. Hunts are 1×1 guiding and run 12 days.
SAVANNAH AND FOREST COMBO HUNT
This outfitter recently introduced a special combo hunt to mainly target Lord Derby eland in the savannah and bongo in the forest (all the various other species available as well). These hunts take place April-May and include 18 hunting days, with 9 hunting days in each region. The total duration of this trip is 24 days. Contact us for details and pricing on this once-in-a-lifetime trip.
SPECIAL COLLECTOR’S HUNT 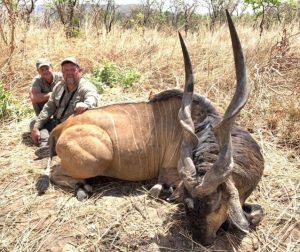 This outfitter has also created a special 2-country safari package that provides an opportunity to collect 3 rare species on one safari spanning Cameroon and neighboring Chad. Korrigum are pursued in Cameroon, and western greater kudu and red-fronted gazelle in Chad (Chad is the only place you can hunt these two rare species). Other species are also available in both countries. Contact us for details and pricing on this special opportunity.
LODGING
Hunting camp accommodations consist of very comfortable bungalows with en suite facilities.
HOW TO GET THERE
For forest hunts, you must make your way to Yaounde, the capital city of Cameroon. Most flights from the U.S. will require 2 stops to get to the international airport there, but there are a limited number of flights available from the eastern U.S. with just one stopover, typically in Casablanca. Once in Yaounde, you will be met by a representative of the outfitter to assist you with clearing customs, and you’ll then be driven by car to hunting area about 7 hours away. 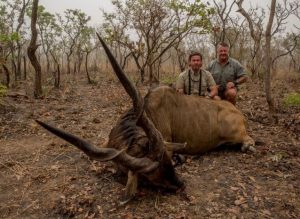 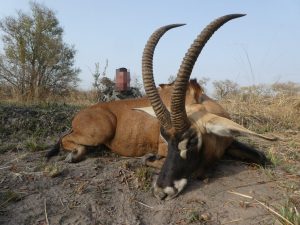 RECEIVE WEEKLY DISCOUNTED AND CANCELLATION SPECIALS DELIVERED TO YOUR INBOX

Thanks for signing up!

“Dear Butch, I am writing to let you know that I had the time of my life with Francois, Reino,...

Fantastic Mulie Kerry, Congratulations! Sibutramine is a serotonin and noradrenaline reuptake inhibitor, which works by affecting brain chemistry. where to...