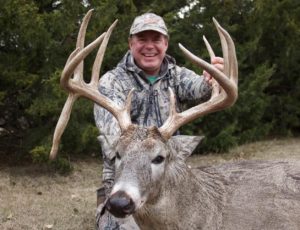 This no-BS outfitter’s philosophy is to sell REALITY, not a DREAM. Sure, he kills monster whitetails and mule deer, but he won’t “sell” you one of those hunts. Deer like that don’t live on every farm, so he leases the highest quality land available and hunts the deer that do live there. He feels that deer over 160 inches are “5% bucks” – 5% of his successful clients are going to slay monster deer like that. The other 95% are going to shoot respectable deer. What happens in most instances is hunters come in wanting a 150” deer, but when a 135” goes broadside at 15 yards, the hunter draws and shoots. So rather than promoting the monsters and have you coming in hoping to shoot a 160”, 170” or even 200” non-typical, he promotes the deer in the 130”-150” range. That way, if you come in expecting a shot at one of these and have success, you will be happy and will have got what you paid for. If you shoot a monster, then it’s just that much sweeter.

KANSAS
He has 38 parcels of farmland leased in 4 different counties in 2 different Units (1 and 2) in northwest Kansas. Much of the land is open crop (typically corn) or grassland, with few trees. While some of these properties have bucks on them year round, generally the bucks move onto these properties after the annual crop harvest and then leave again in the spring, spending the summer living in the corn fields. So once the corn is gone, the deer that have been living in that corn run for cover, which is what this outfitter has leased, and lots of it, including creek bottoms, and he litters these areas with stands and game cameras. He also limits hunter numbers to no more than 6 per camp at each of his 3 camps. All hunts are 5 days. 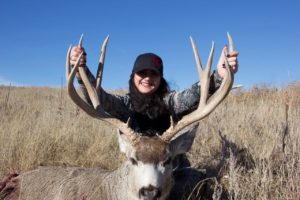 His Kansas hunts are bowhunting only (compounds or crossbows) and he offers both “semi-guided” and “fully-guided” hunts. However, they are both more what is commonly known as “semi-guided”, in that hunters are provided with pre-hung tree stands or ground blinds in bottlenecks or near mineral sites on high-quality private properties, but a guide does not sit with you. A guide will initially show you how to access the property and the stands, and maybe also give you a map of the property with stand locations marked on it, and possibly pictures of bucks known to frequent the property (this makes it easier to pass a tempting buck when you know a bigger one or two are also in the area). Depending upon the location of your property, a guide may even drop you off/pick you up daily, and then go scouting for you, and use this information to move you to a different stand later in the hunt.

There is no distinction between how these two types of hunts are conducted. The only difference (besides pricing and meals included on “fully-guided”) is that the “semi-guided” hunts are on properties with 130”-150” bucks, while his “fully-guided” hunts are on properties with deer that exceed 150” (sometimes much larger than that!). Think of them as “trophy” hunts and “premium trophy” hunts. Rest assured that deer 130” and up are on every farm they have leased. If not, they won’t have pictures of them and will not put hunters on that farm. This outfitter prides himself on the quality of his hunts. Deer that exceed 150” do not live on every farm and must be scouted out and specifically targeted, which is the reason for the higher price of these hunts. However, when you realize that even these higher-priced hunts are still priced comparably to other whitetails hunts in places where you are only hoping that a deer of that caliber resides, the value becomes obvious. And his “semi-guided” hunts are actually a real bargain, as there is always a chance of bagging a 150+” on those hunts too! 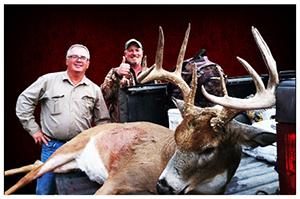 These are serious bowhunts for serious big buck hunters. They are hard work, with early mornings, lunches in the field, and all-day sits. This outfitter prides himself on the quality of his hunts, and his success reflects that. In 2019, he averaged over 1 buck per day harvested between his Kansas and Nebraska hunts, mostly with archery. That’s outstanding! 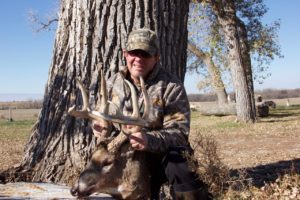 “After consulting with Butch Manasse, he highly recommended this outfitter for a DIY whitetail hunt. I can honestly say that it was one of my best hunting experiences, having hunted with Butch himself, internationally for some years now. Can’t say how much I appreciate the outfitter giving me such a hands-on hunt. After looking over the stand and camera placement, I would not change anything. The only problem was that I never got to get into the Jacuzzi! All stands had safety ropes attached and the placements were my choice also. Good luck bowhunting this year. I may have to try it next year.” – Hunt Nation client John C.

Western Kansas also has some big mule deer, and this outfitter can put you onto bucks in the 180” class, if you can draw a tag. Mulies tags are very hard to draw, and non-residents can only hunt with bow or muzzleloader. No preference points on mulies, so everyone has the same chance. If you do draw the mule deer stamp, then your tag becomes an “Any Deer” tag (either species, either sex), but you can only take 1 deer.

These hunts are normally self-guided (although the outfitter again refers to them as “semi-guided”), so are best-suited to a pair or small group of hunters, rather than the solo hunter. You will be provided with pre-hung treestands or ground blinds on high-quality private properties, and given a map of the property with stand locations marked on it. 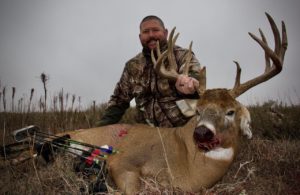 This outfitter has secured several miles of the Platte River near Brady in south-central Nebraska (which can be dynamite during the rut, with whitetail bucks chasing does up and down the riverbottom). The area is under-hunted and hunters report seeing hundreds of deer here over a span of three or four days. Don’t expect to see hundreds, but this is not uncommon. Call the North Platte Game and Fish office to ask about deer numbers in Brady if you just tossed a Red Flag. This property is flat LOADED with deer, so it makes a great hunt for anyone who likes to see large numbers of deer, and he’s got some 2-man stands here so it’s ideal for taking along a youngster or someone new to hunting. However, due to Nebraska regulations allowing rifle hunting during the peak of the rut, the deer here just don’t get as big as the Kansas bucks (although harvest sizes during archery season are almost identical to Kansas because most bowhunters can’t pass up a Pope and Young buck at 10 yards!). Still, plenty of great deer in the 130” to 150” range are taken every year. This area has over the counter deer tags for archery and muzzleloader, and basically a gimme draw for rifle. As such, this outfitter hunts whitetails in Nebraska mainly as a backup if you don’t draw a tag in Kansas.

SHOOTING TEST
Please be aware that this outfitter really cares about the deer, and doesn’t want to see any wounded and lost. To that end, he will put you through a shooting test upon arrival, before you’re allowed to hunt. There will be no trick shots, no backward shots, bank shots, ricochets, combos or anything of the like. Instead, if you say you’re lethal with your bow out to 40 yards, you must put a lethal shot on “Rodney”, their resident deer target, at 40 yards. If you say you’re good at 30, then 30 it is. You get one shot, and you must treat Rodney as if he was your trophy deer standing in front of you live. If you cannot put a lethal shot on Rodney and miss or gut shoot him, you’ll have 24 hours to practice before your next test. If you fail on day two, you’ll again have to wait to hunt another day. Please come prepared.

TURKEYS
This outfitter offers turkey hunts only in Kansas at this point, and the tags are over the counter. These are shotguns-only hunts. They are mainly Rio Grande subspecies, and you can take two toms in Kansas. These hunts are customized, but most include your food, lodging and a guide. He will call for you, or allow you to call, whatever you wish. Seeing flocks of 30 to 50 birds is not uncommon, and normally we expect 100% shot opportunity, barring bad weather. The season opens in mid-April and runs to the end of May.

Nebraska Dates – Archery opens the beginning of September and runs through December. Rifle runs for about a week in November, around Thanksgiving. Muzzleloader is throughout December.

ACCOMMODATIONS
The self-guided hunts don’t include food or lodging. The fully-guided hunts do include food and lodging, and your lodging can range from a hotel, a 1,000 square foot modest home, a 3,000 square foot cabin, or even a fancy lodge. If you’re looking for a mint on your pillow at night and fancy steak dinners, please look elsewhere. 99% of the money you spend with this outfitter is invested in the hunt, and we feel that’s the way it should be. If they have to get a last minute motel room for you so you can get on a monster buck, then so be it, in which case it might just have to be Subway subs for dinner. This is a real hunt, and they do everything they can to help you get on a good deer, even if that means eating PB&J and staying out all day. 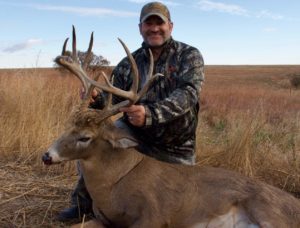 LICENSES
KANSAS:
Whitetail tags (approx. $442.50) are applied for online or by phone at 1-800-918-2877. Non-residents must apply in April. If successful, then you must also purchase a non-resident hunting license (approx. $97.50). Draw odds are historically very high for this either-sex tag (95% of this outfitter’s clients drew last year), and the outfitter will assist you with the draw. If unsuccessful, you receive a refund of your tag fee, and a preference point. You can also just purchase a preference point (approx. $26.50) to increase your chances in the draw THE FOLLOWING YEAR.

NEBRASKA:
Bowhunting tags are over the counter. Muzzleloader and rifle are by draw but are pretty much a sure thing. The outfitter will assist you with the draw. A non-resident hunting license (approx. $97) is required, along with the deer tag (approx. $249). 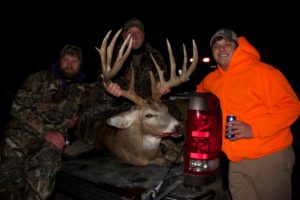 ONE LAST NOTE: Hunting in areas like Kansas and Nebraska which are known to hold giants, IS NOT A GUARANTEE OF TAGGING ONE! You may go home empty handed, or settle for a 125” whitetail or a 145” muley – or you could tag the buck of a lifetime. The excitement is that you are hunting where a monster could show up at any time. Have fun and enjoy the experience!